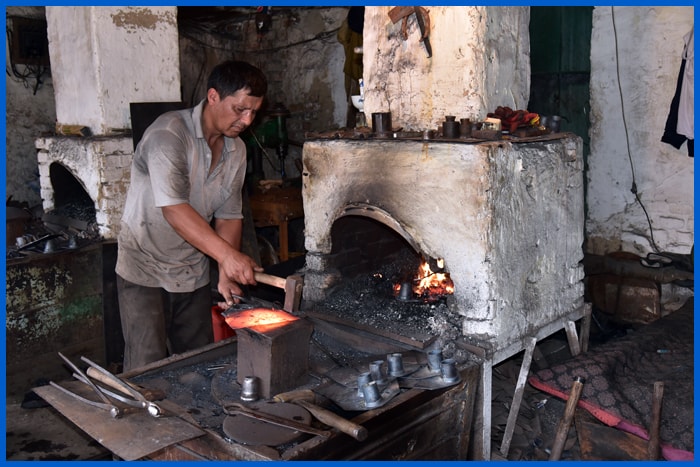 Day 1: Tashkent
Welcome to Tashkent! Your tour starts with exploring Independence square where festive events and military parades are held on days of solemn events and public holidays. After that you will discover the local Broadway, artists sell paintings on both sides of the alley, here you can view and buy various souvenirs.  After that you will have a chance to visit famous Tashkent metro, attraction of the capital. The beauty of the finish, the national color, style and design attract the tourists. Afterwards you will marvel in the old part of the city which includes: Chorsu Bazaar all year round, it impresses with its colorful goods and architectural structure, the breath of antiquity and folk culture, Kukaldash Madrasah and Hast Imam complex. You will also observe the Othman Quran, highlight of the exhibits. The oldest extant manuscript of the Quran, which is believed to be stained with the blood of the third Caliph - Othman. Night will be in the hotel.

Day 2: Tashkent - Samarkand (morning train)
Today you will head on to railway station of Tashkent for your train to Samarkand. One of the oldest cities in Central Asia, nestled in the flowery valley of the Zeravshan river. You will explore the most remarkable points of this city such as: Registan square main square of Samarkand, Shakhi-Zindeh, Mausoleum Guri Emir and Bibi Khanum Mosque. Registan square, the "heart" of ancient Samarkand, is the city's most famous landmark. It is difficult to find a place as beautiful as it is historically important. Architectural complex of Shakhi-Zindeh consisting of a string of elegant, sparkling blue tombs. Harmoniously intertwining in a living and moving composition, the multi-time mausoleums are closely grouped along a narrow medieval street. Bibi Khanum the architecture of the structure is a tribute to the fashion of the time for a pompous monumental style, which is very accurately reflected in the famous statement of Timur: "if you doubt our greatness, look at our buildings." Night you will spend in the hotel.

Day 3: Samarkand - Bukhara (train)
This day you will have a morning train to Bukhara. This day is dedicated to a city tour in this amazing city. The first destination will be the most ancient citadel in Bukhara dating back to the 4th century named Citadel Ark. At one time, the Park towering over Registan square was a symbol of greatness, power and inaccessibility. Afterwards you will experience Chashma-Ayub mausoleum - a religious building in the center of Bukhara, which includes a mausoleum and a sacred spring. Further you will walk along the shopping domes and after that you will explore one of the most famous madrasahs of Bukhara called Nodir Divan Begi including madrasahs and house, is closely related to the name of the vizier Nîdir Divan-Begi, who served under Imamkuli Khan, one of the strongest rulers of the Ŕshtarkhanid dynasty. After you will conclude the tour with exploring Poi Kalon complex.  It stands on the main square of Registan and impresses with its grandeur. It consists of three structures built in the 12th - 16th centuries: Kalon minaret, Kalon mosque and Mir Arab Madrasah. Night is in a hotel.

Day 4: Bukhara - Khiva (440 km, 7 hours)
This day you will start tour with transferring to Khiva. Surrounded by powerful walls, the historic inner city of Khiva - the pearl of the Khorezm oasis-has been declared a world heritage site by UNESCO. Khiva quite rightly bears the title of a Museum city, as anyone will certainly find here interesting and rich history of cultural monuments of ancient Muslims, ancient architectural ensembles that were built here in different eras of the city's existence. You will drive from Bukhara to Khiva through well-known Kizilkum desert. En route you will take a pleasure from the view to Amu Darya river, the largest river in Central Asia. The Amu Darya receives its waters from two mountain rivers Vakhsha and Pyanj, being a continuation of the Pyanj and flowing into Aral See. After arrival in Khiva you will have free time. Overnight will be at the hotel.

Day 5: Khiva - Tuprak Qala - Ayz Qala
In the morning you will have a wonderful sightseeing tour in the oldest city of Uzbekistan. Surrounded by powerful walls, the historic inner city of Khiva in Uzbekistan, which became the first world heritage site in Central Asia. Built over the centuries (the most ancient architectural monuments belong to the XIV century), fortifications and palaces, mosques and madrassas, mausoleums and minarets, caravanserais and baths have turned Ichan-Kala into a unique monument city. There are over 400 traditional dwelling houses and about 60 architectural monuments. Officially, Old Khiva received the status of a city-reserve in 1968. The most remarkable sites in it are the Kunya-Ark fortress served as one of the Khan's residences, found by Muhammad Arang Khan, Kalta Minor minaret and Tash Khouvli palace, an incredible masterpiece of Khorezm architectural of 1830s. Later afternoon you will drive to Ayaz Qala desert yurts camp. Arrival, dinner on fire and night will be in the yurts.

Day 6: Ayz Qala - Nukus
Ayaz Qala is one of the most spectacular fortresses in Khorezm. Fortress dates back II century AD. In fact, there is not one, but a complex of three fortresses grouped around a high hill on the Eastern side of the Sultan-Uizdag range. Toprak-Kala is known not only for its quaint architecture,but also for unique finds of ancient Khorezm writing. Documents written in the ancient Khorezm language were found in four rooms of the South-Eastern part of the Palace. Your settlement will be at yurts camp close Ayaz Kul Lake. Transfer to Nukus, check in and overnight.

Day 7: Nukus - Tashkent (flight, 21:00-23:00)
You are going to have a full day city tour. This green oasis surround three deserts - Kara Kum (Black sand), Kyzyl Kum (Red sand) and stony desert - a plateau Ustyurt. In course of the tour you will have an interesting city tour in this city. The first destination will be Museum of Savitsky which exhibits the masterpieces of forbidden art. The state Museum of arts of Karakalpakstan was established in 1966 on the initiative of the Moscow artist Igor Savitsky (1915-1984). Currently, this is the largest art collection in the Central Asian region, with about 100 thousand items of storage with a chronological coverage of more than four millennia. Then you will transfer outside of Nukus to see Mizdakhan necropolis. Mizdakhkan is a grandiose architectural complex of ancient Khorezm with an area of over 200 hectares, which is located on the top of hills near a major highway leading to the Ustyurt plateau and Muynak. In the tour you will also explore a 2200 years-old Zoroastrian ancient monument known as Chilpyk. In the evening you will have a flight to Tashkent. Overnight at the hotel.

Service does not include:
- Visa
- Full board
- Travel insurance
- English speaking guide
- Entrances to all museums