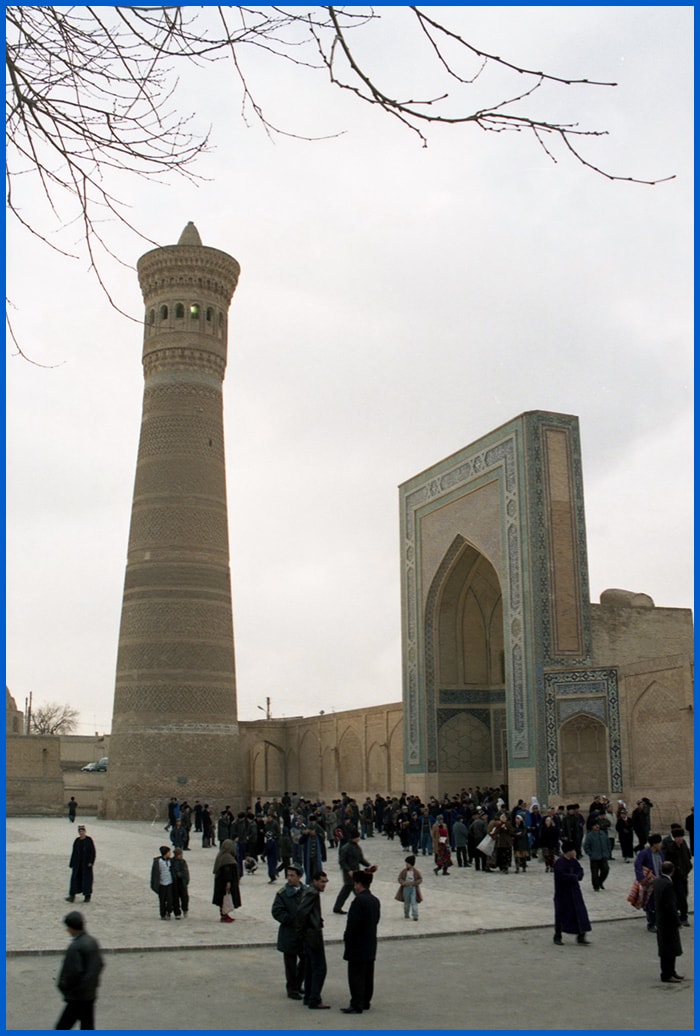 Day 1: Tashkent
You will get acquainted with your guide at the airport and then drive to Tashkent. Tashkent is the multi-faceted capital of modern Uzbekistan, the center of cultural and political life of the Republic. Full day is devoted to a highlight tour in Tashkent. You will explore today Independence square, a favorite place for citizens to take a leisurely walk among the refreshing streams of iridescent fountains and green alleys. After you will have an opportunity to stroll along the local Broadway, a walking street between independence square and Amir Timur square. Further you can take a ride in famous Tashkent metro, Its beauty daily pleases residents and leads to the amazement of guests of the capital. In course of the tour you will explore the old part of the city that consists of: Chorsu Bazaar, here you can buy Souvenirs and gifts, as well as taste dishes that make up the pride of the national cuisine, Kukaldash Madrasah and Hast Imam, the square and the architectural ensemble were named Hazret Imam ("Holy Imam") in honor of the famous Imam, scholar of the Koran, scholar and preacher Abubekr Kaffal al-Shashi. The highlight of its exhibits is the Othman Quran, the ancient copy. Night will be spent at the hotel.

Day 2: Tashkent - Nukus
This day you will have a flight to Nukus. Nukus- capital of the Autonomous Republic of Karakalpakstan, part of the Republic of Uzbekistan. You are going to have a full day city tour in this city.  Today you are going to discover the Museum of Savitsky. The capital of Karakalpakstan is rich in sights. The huge popularity of the world-famous State Museum of arts named after I. V. Savitsky, which abroad called "one of the best museums in the world." It houses the world's second largest and most important collection of Russian avant-garde art. Then you will transfer outside of Nukus to see Mizdakhan necropolis. Mizdakhan was built in the IV century BC, and the remains of its magnificent buildings today attract believers from all over the world. Also you will explore a 2200 years-old Zoroastrian ancient monument known as Chilpyk. Overnight at the hotel.

Day 3: Nukus - Ayaz Qala - Tuprak Qala - Khiva
You are going to departure today to Khiva, The city of Khiva has a very rich and interesting history of its development. For all the millennia of its existence, it has experienced wars, conquests and epochs of prosperity. Previously, it was the capital of ancient Khorezm, which was repeatedly conquered. Among the invaders can be attributed to the Achaemenid, Arabs, Mongols. Also, Khorezm was not just given to Amir Timur - only after the fifth campaign, the state was captured. Khiva is a very old city, which includes 2 cities: Ichan-Kala and Dishan-Kala, i.e. the inner and outer city. Ichan-Kala is considered a very important historical heritage and therefore this object is under the auspices of UNESCO. En route you will discover two famous fortresses: Ayaz Qala and Turpak Qala. Ayaz-Kala settlement-ruins of an ancient fortress from the time of the Kushan Kingdom, located in the Sands of Kyzylkum on the territory of Uzbekistan. Night is in a hotel in Khiva.

Day 4: Khiva - Bukhara
Today you will direct to wonderful city Bukhara. Bukhara is one of the oldest and one of the most famous cities in Uzbekistan, once a major trading center on the great Silk Road. According to legend, Bukhara was founded before our era by the legendary ruler of Turan and the hero of the famous Persian epic "Shahnameh" - Afrasiab. You will transfer via famous Kizilkum desert. In course of the tour you will contemplate the view to Amu Darya River. The Amu Darya originates in the Hindu Kush Mountains. Here it flows under the name of Wagger, and from the confluence of the Panj with the Vakhsh river is called Amu Darya. On arrival you will have free time. Night will be spent at the hotel.

Day 5: Bukhara
You are going to have a sightseeing tour in amazing Bukhara. You will direct to first point the most ancient citadel in Bukhara dating back to the 4th century named Citadel Ark is a large earthen fortification in the North-Western part of modern Bukhara. In plan it resembles an irregular rectangle. After that you will go to Samanids mausoleum, it is one of the best examples of architecture from the period of the Samanid dynasty (875-999). The tour will proceed to Chashma Ayub, one of the main sights of Bukhara. You will also have a chance to saunter along the shopping domes and visit madrasah Nodir Divan Begi that is part of an architectural complex located around the famous Lyabi house in Bukhara, famous central sightseeing of Bukhara. The tour will end with visiting Poi Kalon complex, the word minaret comes from" minor " - that is, the place where the fire is lit indicating the way, like a lighthouse. This minaret plays a special role in the architecture of Bukhara. Night is in a hotel.

Day 6: Bukhara
You are going to explore the highlights on the surrounding area of Bukhara. You will discover Bahauddin Naqshbandi complex, located not far from Bukhara. The ensemble of Bah ad-Din took the forms of combining the necropolis with a ceremonial building typical for the XVI century. In 1544. Abd al-Aziz Khan I burial of the Sheikh was designed as a ground - based crypt-dakhma with a marble carved fence on top, and in the distance - the largest known building of the khanak.  Sheikh Bakhauddin Nakshbandi the great theologian of the XIV century, the founder of the Naqshbandi Sufi order is buried 12 km from Bukhara in the town of Kasri Orifon. Once there was a pagan temple on the site of the present Naqshbandi tomb. Further you will head to the countryside residence of Bukhara Emirs named Sitorai Mohi Hosa complex. The main building of the Palace includes several halls for receiving guests, as well as the Emir's private rooms. A special place here is occupied by the White hall, which was created under the guidance of the famous master Shirin Muradov.  To conclude the tour you will discover Sumiton village to discover Chor Bakr memorial complex, in the center of the Chor-Bakr necropolis, a madrasah, mosque and khanaka are being built as a gift for the Jubayri dynasty. In the end of the tour you will transfer to the city. Overnight at the hotel.

Day 7: Bukhara - Gijduvan - Samarkand
Today you will transfer to amazing Samarkand. in Gijduvan, all the traditions of making ceramic products and the special principles of their painting and finishing have been preserved.A characteristic feature of the Gijduvan school of ceramics is an abundance of pots and pans, as well as necessarily lids to each vessel. They are designed to maintain the temperature of the dish served. The Museum presents products where the main tone of the painting is warm Golden-green colors. Another characteristic feature is the plant pattern on the border of the product, as well as the easily defined top and bottom of the drawing - "sky" and "earth". Then you will  drive to Samarkand. Night is in a hotel.

Day 8: Samarkand
Samarkand is one of the oldest cities in Central Asia, located in the valley of the Zeravshan river. It is one of the three largest and most populous cities in Uzbekistan.In course of the tour you will explore such highlights as Registan square, Shakhi-Zindeh, Mausoleum Guri Emir and Bibi Khanum Mosque. Registan is an ornament of Central Asia, one of the most magnificent squares in the world, which is located in the center of old Samarkand. Gur-Emir (translated as "Emir's tomb", "grave of the ruler") - the tomb of the Timurids, a masterpiece of architecture in Central Asia. Bibi Khanum Mosque one of the most grandiose mosques in the entire Muslim world, the largest mosque in Central Asia. The most majestic and picturesque masterpiece of the monuments of architecture of the Middle ages, the cemetery street, as the locals call it Shakhi-Zindeh. You will spend the night in the hotel.

Day 8: Samarkand - Tashkent (transfer or train)
Today you are going have a transfer or train to Tashkent. You will have a chance to have a sightseeing tour in Tashkent. The first attraction will be Courage Monument which 10 years later, in 1976, on the site of the epicenter of the earthquake, the monument "Courage" was erected, symbolizing the fortitude and courage of people in the front of the disaster. After that you will direct to Zangi Ota memorial complex. The Zangi-Ota complex consists of three parts: the first part is the buildings belonging to the XIV-XIX centuries; the second part is the cemetery and the mausoleum of Ambar-Bibi, the wife of Zangi-Ota; and the third part is a large garden. In course of the tour you will also observe the State Museum of Timurids' history which includes: jewelry, musical instruments, weapons, various coins, paintings, documents, historical manuscripts and clothing of Timurid's period. The city tour will be completed by visiting the State Museum of Applied Arts of Uzbekistan, has collected more than 7,000 best examples of folk crafts created by artisans from different regions of Uzbekistan. Night will be spend in the hotel.

Day 10: Flight
In the morning is transfer to airport.