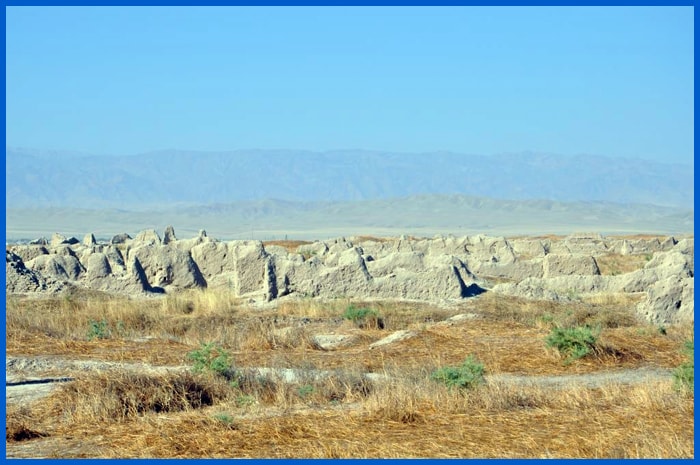 Day 1: Ashgabat
You will get acquainted with the lońal guide at the Ashgabat International Airport. Today you will have a sightseeing tour in Ashgabat. Ashgabat is a relatively young city. According to archival research, the city was established in 1881 on the site of a small Turkmen settlement. There are a lot of monuments, fountains, museums, religious buildings and many other attractions. City tour of Ashgabat consists of Lenin's square, Park of Independence (looking like a white-marble "Eiffel Tower" standing in a beautiful park), Arch of Neutrality. Afterwards we will visit Museum of Ethnography and Museum of Fine Arts. Overnight is at hotel.

Day 3: Kow-Ata - Nokhur
After breakfast you will head on to Nokhur. Nokhur-Paradise is located at an altitude of 1000-1100 meters above sea level in the valley between the mountains Uchkui and Monoman, bounding the valley to the West and East and the Kelyat range to the North in the Akhal velayat of Turkmenistan. The village is home to a special group of Turkmen - nahory, with a strong separate identity. Being quite small in number, living compactly only in a few mountain villages, the nohurs have preserved their dialect of the Turkmen language, which is closer to the Western Turkic languages.

Day 4: Nokhur - Darwaza - Dashoguz
This day you will head on to Darwaza gas deposit. Darvaza, aka "gate to hell", aka "door to hell" - the most fascinating attraction of Turkmenistan. You will stay in a camp with amazing catering -enjoy to spend time here. You will have a chance to overlook this mysterious highlight. If you visit this place during daylight hours, you will be able to observe the flames. But if you wait for dusk or darkness, you will see an incredible picture that takes your breath away. In the dark, fire breaks out from the ground, like in the movie. Then you will transfer to Dashoguz. You will spend the night in the hotel.

Day 5: Dashoguz - Kunya Urgench - Ashgabat
After breakfast you will transfer to Kunya Urgench the ancient capital of northern Khorezm. There you will explore architectural monuments of Old Urgench. In course of the tour you will discover the Mausoleum of Najm al-Din al-Kubra, TyurabekKhanum a real historical figure, a Mongolian Princess, Il-Arslan, Tekesh Ibn Hadzhibey, the highest minaret in Central Asia KutlygTimur. In the end of your tour you will transfer to Dashoguz domestic airport, flight to Ashgabat. Overnight will be at the hotel.

Day 6: Ashgabat - Merv - Mary
In the morning you will departure to the east of Turkmenistan to visit fortress Abiverd with continuing to Ancient Merv. Abiverd was an impregnable fortress that saved the citizens from the raids of nomads. The fortress had a single gate on the southwest side. Inside, in the center, there was a mosque built in the early 15th century, not far from it there was a square. You will also discover ruins of Seyit Jamal-ad-Din Mosque. Once there were four structures: the mosque itself, the building over the tombstone located in front of the mosque, and two large buildings with high domed halls.  Merv district is one of the most ancient regions of Central Asia, which first mastered irrigation. Therefore, it is not surprising that one of the largest cities of the ancient world - Merv-grew up here. You are going to have guided tour there exploring: Gyz Gala, Erk Gala, Soltan Gala, Soltan Sanjar Mausoleum, Ibn Zeid Mausoleum. After that you will head on to Mary. Night will be at the hotel.

Day 7: Mary - Ashgabat - Nissa - Horse farm - Ashgabat
In the morning you will head on to the airport to catch a morning flight to Ashgabat. During the tour you will direct to Nissa fortress -the capital of the once-powerful Parthian Kingdom. This monument city is divided into two parts-the fortress of Old Nisa and New Nisa. After that you will go to popular Horse farm and have a great opportunity to contemplate the jewel of Turkmenistan Akhal-Teke horses. You will observe short show by riders. After that you will drive to Ashgabat. You will spend the night in the hotel.

Day 8: Flight
In the morning is transfer to airport.