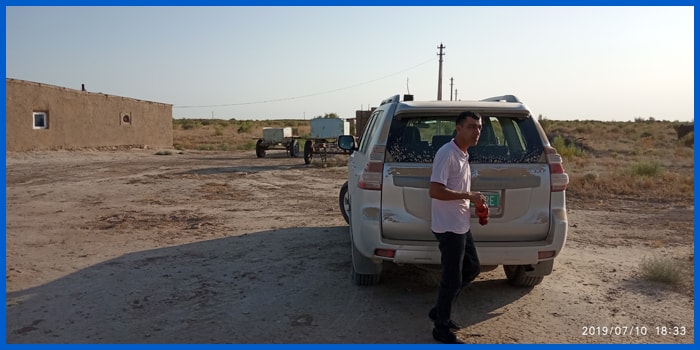 Day 1: Ashgabat
This day you will be met by your guide at the airport and accompany you to Ashgabat city. You will begin your tour with wonderful sight that situated in Gokdepe village Turkmenbashy Ruhy Mosque, the biggest mosque in Central Asia. The mosque was built in 2002-2004 on the initiative of Turkmenbashy and is also named after him. Then you will direct to the next attraction Gokdepe horse farm. You will have a possibility to overlook one of the values of Turkmen People Akhal-Teke horse. Then you will drive to Ashgabat. In course of the tour you will explore Independence Park and the Palace of Happiness where you can see the panoramic view of the Ashgabat city. You will spend the night in the hotel.

Day 2: Ashgabat - Kow Ata - Nokhur
In the morning you will drive to the Kow-Ata underground lake and the well-known Bakharden cave. Kow-Ata lake is unique: it is filled with healing thermal water containing a special set of minerals and chemical compounds, which are responsible for the health effect. Its medicinal water contains almost a third of the chemical elements of the periodic table, including sulfur, iodine, magnesium, potassium, sodium, sulfate, as well as chlorine, aluminum, bromine, iron, and antimony. Afterwards you will transfer to Kopet Dag range, the village of Nokhur is inhabited by the Turkmen of the Nokhur mountain tribe, who have kept their culture, traditional crafts and architecture. Night is in a homestay.

Day 3: Nokhur - Ashgabat - Kerki
Your tour continues with  transferring back to Ashgabat and observing the memorial complex in honor of those who died in the battle of Geoktepe, the war of 1941-1945, as well as commemorating the victims of the Ashgabat earthquake of 1948. The bronze sculpture is 10 meters high, and rises 24 meters above the square. Until 2012, a monument created on the initiative of President Saparmurat Niyazov in the form of a mighty bull holding the split Earth on its horns. Then you will explore the colorful Russian Market. There is a wide range of products and a variety of food establishments. In the end of the tour you will transfer to the train station to move to Kerki town. Night is on the train.

Day 4: Kerki - Koytendag
Upon arrival to Kerki town you will have time for breakfast. Thhan you will departure to the Koytendag mountain and nature place. The Kugitangtau mountains have become very popular not only because of their canyons, but also because of their unique cave complexes. Some caves of Kugitang are like a stone jungle, among which there are galleries of halls crowned with bizarre stalactites and stalagmites, gypsum and Celestine deposits similar to porcelain, "cave pearls", "stone groves", "frozen stone flowers". The most important paleontological object of world significance in Western Kugitang is the well-known dinosaur plateau with the imprints of ancient giants, about 160 million years old. In the tour you will overnight at the camp.

Day 5: Koitendag - Turkmenabat - Ashgabat
Today you will transfer to the Turkmenabad airport for flight to Ashgabat. Night is in a hotel.

Day 6: Flight
In the morning is transfer to the airport.

Note: Each Traveler should have 2 photos (5×6) to be presented at the points of entry.