Perfection of the nature 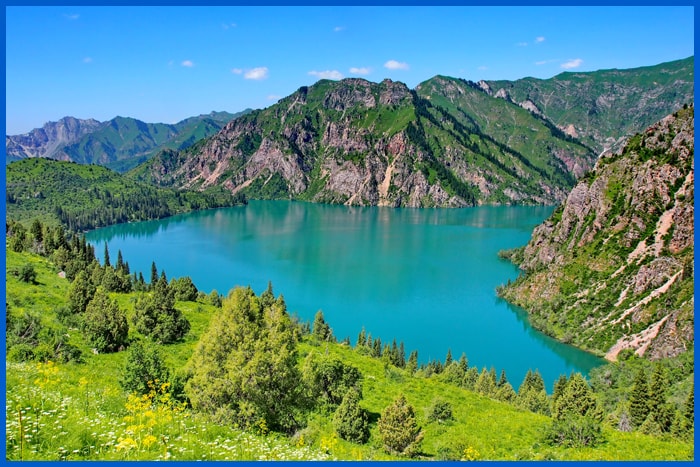 Perfection of the nature

Day 1: Bishkek - Toktogul
After being welcomed at Manas International Airport by your guide you will start driving to Toktogul. The city is the center of the livestock district. Most of the population is engaged in livestock breeding. You will drive today to the south part of Kyrgyzstan. You will pass today through mesmerizing landscapes and will be inspired by impressive mountains. During the tour you will make stops and take a lot of exciting photos. You are going to observe today the fascinating panorama view from Too Ashuu that is more 3000 meter high. The Too-Ashuu pass was the most important pass of the Great silk Road in ancient times. It was along this route that numerous caravans of loaded camels went to the West. Too-Ashuu is also famous for the legend of the hero Kozhemyak who carried a wounded horse through the pass on his shoulders. You will have a night in a local guesthouse.

Day 2: Toktogul - Sary Chelek
The tour starts with driving to  Sary Chelek lake. Sary Chelek is a picturesque high-altitude reservoir, which is considered one of the most beautiful lakes in the West of Kyrgyzstan. In Kyrgyz, the name "Sary-Chelek "means" yellow bowl". The freshwater lake lies at an altitude of 1848 meters above sea level. Scientists believe that it arose 10 thousand years ago as a result of a large mountain collapse, which gave rise to a strong earthquake. The reservoir stretches for 7.5 km and has an average depth of 98 m and a maximum depth of 234 m. This is the second deepest lake in Kyrgyzstan. The rapid Kojo-Ata River flows out of Sary Chelek. The Northern Bank of Syry-Chelek is almost entirely covered with spruce and fir forests, their density is such that in the thicket, even on the sunniest day, it is semi-dark and cool, the air is filled with the smell of needles and flowering herbs. In streams sports not frightened Marinka (trout species), the slopes of the hills overgrown with wild raspberries and blackberries - a real earthly Paradise. Night will be at the home stay.

Day 3: Sary Chelek - Osh
After breakfast you will direct to Osh city. The way will take 6 hours and today you will also drive along a mountain road. En route you will visit Djalal Abad town and its famous Uzgen Tower. Djalal Abad is the third largest city in Kyrgyzstan and the administrative center of the Djalal Abad region. Uzgen minaret, whose height is about 27.5 m, was built in the early XII century, when the city was the capital of the Karakhanid state and resembled the famous Burana tower. You will be impressed by divine road with its snow peaked mountains, alluring landcape and fabulous pictures. Today you will also have a chance to shoot amazing photos. In Osh city you will saunter in the streets and visit the highlight Suleiman Mountain. Sulaiman-Too, is located within the borders of the southern capital of Kyrgyzstan - the city of Osh. The monument is part of the world heritage as a unique natural attraction that is related to deep cultural traditions and cult practices, as well as representing the clearest evidence of the worship of mountains for several millennia. You will spend the night in the cozy hotel.

Day 4: Osh - Airport
In the morning is transfer to airport.