Following the footsteps of nomads 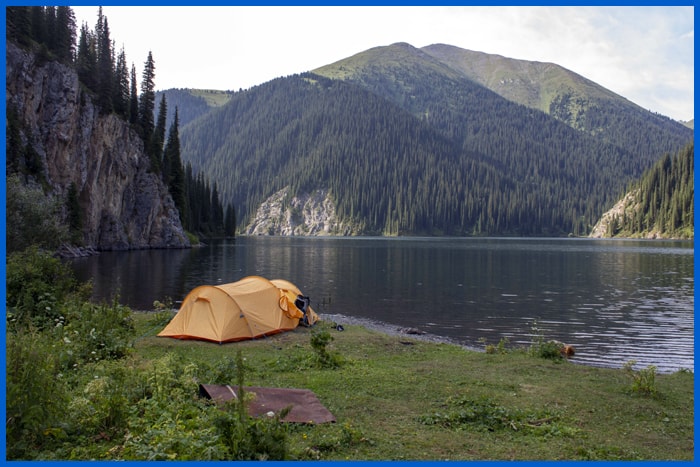 Following the footsteps of nomads

Day 1: Nur-Sultan
After being welcomed at the airport by your driver, you will direct to the capital of Kazakhstan- Nur- Sultan. Nur-Sultan is a cultural center, the city surprises with its "cosmic" views, modern architecture.  You will have today a sightseeing tour visiting the Constitution Square, Museum of the First President- the Museum named after him is located in a former residence on Beibitshilik street. The exhibition consists of personal books of N.Nazarbayev, his scientific works, awards and interior items and  shopping center Khan Shatyr, the unusual design of the building resembles a huge tent, spread out among the endless Kazakh steppes. After you will head on to the remarkable monument Astana-Baiterek, take the lift to the top and admire the mesmerizing panoramic view of the city. The building gives the city a modern look. After you will cross Ishym river and get to the Kazakh Eli Square. And observe the unique project - the Palace of Peace and Reconciliation, and also admire charm of Khazret Sultan mosque. The snow-white Khazret-Sultan mosque accommodates up to 10 thousand parishioners. Also in the tour you will explore National Museum of History of Kazakhstan*.  At the end of the tour you will be dropped to the local hotel.

Day 2: Nur-Sultan - Ethno village - Nur-Sultan
By the will of fortune, the Kazakh people are located at the intersection of Eastern and Western cultures. Kazakhstan is proud of its rich cultural heritage. Since hospitality has long been a distinctive feature of the Kazakh people, guests in the house are always given a proper welcome and a place of honor. If you want to feel traditions, immerse into culture you will get acquainted with with the secrets of traditional culinary arts, that you will acquire during this amazing tour. During the tour you will a great chance to take a part in production of a very ancient Kazakh musical instrument, an authentic value and heritage of the Great Steppe - ‘sazsyrnay'. You will never hear a story about the Great Kazakh steppe and nomadic people without the yurt. Portable housing of nomadic and semi-sedentary peoples of Central Asia. Since ancient times, the Kazakh people passed on the methods and secrets of Yurt construction from generation to generation. You will have a chance in the tour to participate in the construction of the yurt. In the end of the journey you will be invited to try on the Kazakh national clothes and dance the national dance "Kara zhorga". And explore  EXPO museum (is not accessible on Mondays) and the triumphal arch "Mangilik El". In the end of the tour you will transfer to the hotel.

Day 3: Nur-Sultan - Almaty
Today you will transfer for a flight to Almaty. Almaty is a sunny, green city with wide streets. The tour starts with sightseeing in central part of Almaty. The day is devoted to the wonderful city tour, where you will explore the most remarkable highlights. You will visit- the Green Bazaar**, the Central market, which has more than a century of history, is also popular with tourists. After you will head on to Panfilov Park a monument of history and architecture, founded in the second half of the XIX century. The Green Park with perennial oaks, maples, aspens, pines and firs is located around the famous Zenkov Cathedral. En route you will observe the Memorial of Glory and Eternal Flame.  And in the second part of the day you will admire the beauty of  the Medeo Gorge, where is situated the world-famous high-altitude skating rink, built in 1972. After you will discover one of the most amazing sights of Almaty the Kok-Tobe hill. Where is situated TV tower, the height of the tower is 371 m above the ground and almost 1.5 thousand m above sea level, which makes it one of the highest TV towers in the world. In Kok-Tobe Park you will breath fresh air, walk in amazing streets, admire the charming panoramic view of the city. You will have a chance to take a ride by the cableway of Almaty.  In the end of the tour you will drive to the hotel for overnight.

Day 4: Almaty - Saty - Kolsai Lake - Saty
Among the snow-white mountain peaks, where the Zailiysky Alatau and Kungey-Alatau ranges join, in the small Kolsay gorge, the Kolsay lakes, the jewels of nature of picturesque Kazakhstan, are hidden. The lakes are surrounded by majestic fir trees, and three lakes shine in the light of the bright mountain sun, justifying their title of "the pearl of the Northern Tien Shan". The first to greet the tourists of the lake Saty. Its depth is 80 meters and its length is about 400 meters. Water in lakes constantly changes color, depending on how the sun's rays fall on it. From soft blue to rich emerald, as if the surrounding fir trees gave the lake all their best colors. Around the lakes, fairy-tale thickets of flora are scattered in Islands, from beautiful Edelweiss to noble maroon-red shrubs and quirkily twisting deciduous trees, mixed with serious Tien-Shan firs. The lowest lake you can reach by car. You should walk few kilometers along mountain path to admire the beauty of the second and the third lake. While marveling the area of lakes you can observe Marals, mountain goats, wolves and even bears. You will drive to Saty settlement, accommodation in the cozy guest house/ homestay. Dinner. Overnight.

Day 5: Kolsai - Charyn - Almaty
Today you will head on to one of the most prominent sights of the country Charyn Canyon and then drive to Almaty. Charyn canyon is a smaller copy of the famous Grand Canyon-it is inferior to the Arizona one in size, but not in beauty. The canyon is located 200 km from Almaty, near the border with China, and is composed of sedimentary rocks that are approximately 12 million years old. The height of the steep mountains of the canyon reaches 150-300 m. The valley of castles is a rock Deposit resembling the shape of towers, which were as if created by unknown giants. The "Valley of Castles", is more than 2 km long, and the width in different places reaches from 20 to 80 m. the diversity of the landscape of the Charyn canyon causes a variety of flora and fauna. There are more than 1500 species of plants, 17 of which are listed in the Red book of Kazakhstan, 62 species of mammals, 103 species of nesting birds, 25 species of reptiles. In the end of the tour you will drive to the hotel for overnight.