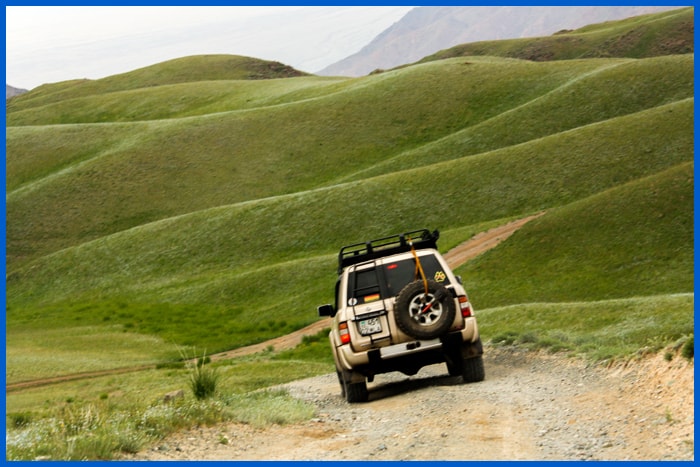 Day 1: Chernyaevka - Shymkent
Today in the morning meeting at Zhibek Zholy (Chernyaevka) border crossing point. You will drive to Shymkent. Shymkent city is located in the South of Kazakhstan. Its name can be translated into Russian as "garden city". You will have a wonderful ity tour in this city and explore following highlights: Walk of fame (park after Sh.Kaldayakov including Obelisk of Glory, Eternal Flame to the fallen in The great Patriotic War), "Zher Ana" monument, Ordabasy square, Park "20 years of Independence of the Republic of Kazakhstan", Arboretum and Regional Museum, Museum of Victims of Political Repression. You will spend the night in the hotel.

Day 2: Shymkent - Turkestan - Shymkent
Upon arrival is driving to Turkestan. After you will explore highlights such as "Azret-Sultan" historical and architectural complex, Mausoleum of Khoja Ahmed Yasawi (Necropolis, a fragment of the fortress wall, citadel with gates, Hammam, Hilvet underground mosque). The first mention of a settlement on the site of the modern city of Turkestan, located at the intersection of the caravan routes from Samarkand, Bukhara and Khiva to the North, appeared around 500 AD. In the X century - the city of Shavgar (Shavagar) is mentioned, since the XII century-Yasi (Yassy). In the middle ages, Yasi was a fortress city. In the XII century, there lived a Sufi poet, philosopher Khoja Ahmed Yasawi, who was buried here. Tamerlane, whose Empire included Yasi, in 1396 - 1398 began to build a mosque next to the Yasavi mausoleum. But it didn't work out right away. First, he had to build the Arystan Baba mausoleum - another important Islamic mausoleum in Turkestan that has survived to this day. Saint Arystan-Baba, in some ways, was the predecessor of Yasavi. Legend has it that the prophet Muhammad himself gave his rosary to Arystan Bab, who in turn gave it to the young Yasavi. In the end of your tour you will drive to Shymkent. Night will be spent in the hotel.

Day 3: Shymkent - Almaty
The tour starts with driving to the airport you will fly to Almaty. The former capital of Kazakhstan, the city of Almaty remains an important cultural center. You are going to have a city tour today. First you are going to experience the Green Bazaar, one of the oldest markets in Almaty. It is located in the Central part of the city, in the Medeo district. After you will go to one of the oldest Almaty parks - Panfilov Park. There is situated one of the most stunning churches in the world - Zenkov Cathedral. Then you are going to explore the most remarkable site of the city the Medeo Gorge, well known due to the highest mountain skating rink in the world and Shymbulak resort. The sport complex Medeo is a monument of urban planning and architecture, and is of national significance. Then you will direct to the Kok-Tobe hill. Where is located the observation decks and Ferris wheel; you can admire the green hills, mountain peaks and city panorama. In Kok-Tobe Park you can marvel along the mesmerizing paths of the park, breath fresh air and visit the shop of national souvenirs. The tour ends with the short ride from the top of the hill to the center of the city by the famous Almaty cableway. Transfer to the hotel.

Day 4: Almaty - Charyn Canyon - Almaty
Today you will have a day trip to Charyn Canyons. In its appearance, the Charyn canyon resembles the Grand Canyon of Colorado, located in North America. The Kazakhstan canyon is somewhat smaller than the Grand Canyon of Colorado, but they are equal in beauty. It will take about 3 hours to reach the canyon. The Charyn canyon natural monument is composed of sedimentary rocks about 12 million years old. The height of the steep mountains reaches 150-300 m. The oldest vegetation flora has been preserved here, for example, ash grove, varieties of ferns, and many flower and spore representatives of the herbarium. There are rare and endangered species of animals, mammals, and arthropods listed in the Red Book. You will adore the grand panorama and then have a walk through the maze of the Castles Valley. This amazing valley is 2 km long and 20 to 80 m wide. Night is in the hotel.

Day 5: Flight
In the morning is transfer to airport.